It’s all about feeling very comfortable in your own skin with total confidence while you’re playing with your”Nude La’ Hoop”like a kid all over again.Now this is how to have fun with your nudity like you naturally mean it…and enjoy it!!

So many women feel comfortable shooting #topless and nude #selfies. You know they would love nudist resorts too. How do we market to them? That is the question? Obviously, tumbler is a great way. Suggestions anyone?  MC

To see over 500 photos of our nude sunbathing resort and Palm Springs, visit our pinterest site at http://pinterest.com/terracottainn 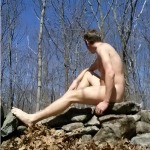 I’m writing this, naked, from a mountain top.  Okay, maybe it’s more like  a hill in New Jersey but at least I’m naked and in the sun. That was a long winter we had, here in the Northeast!

I sent one of thethe above selfies to my Dungeons and Dragons peeps.  (Yes, I play D&D; Yes they know I’m a nudie.)

What a world that we live in that I can be up here composing and posting my thoughts.  But it gets so misused: People working weekends. Bosses in touch 24/7. “Duty.”  I’m glad that I can write this from a laptop instead of a notebook but with such convenience comes the responsibility to myself to say, “No,” when I don’t want to be reached.  Or maybe I could invite my bosses to meet me here, naked of course, and see if they would join me.

The bugs are REALLY waking up now and the sun is going in. Think I’m going to head down my hill.  Thankfully, many more warm days are ahead.

Anyway, I’m naked on a hilltop and, even though it’s in New Jersey, I can’t complain.

Winners (with video at Liveleak)

Also, please be sure to visit their website here:
http://www.rocklodge.com/

Rock Lodge has 145 acres of pristine woodland, focusing on its spring-fed lake. Members enjoy playing tennis on our courts, teaming up for volleyball, soaking in the hot tub after the sauna, hiking, swimming, boating or just relaxing by the lake. Our social calendar is always full. There are dances, pot luck dinners, impromptu parties and Sunday “Coffee Klatch”, a gathering to greet old friends and make new ones. Come discover our version of heaven.

“You look fine, stop worrying!”: How naturism and true friends have helped bring my confidence back

Monday, 6 May 2013
So, last time I posted I was a little down in life and this led to me losing a lot of weight and losing a fair bit of the confidence in my body that naturism gave me.

Since then I have been on a mission to improve the way I feel about myself again and my state of well being. I have been on a gain weight diet, not strict but it has helped. This has also been coupled with advice from a friend who has an eating disorder, giving me tips on how to gain and much support. I also have a job now which has improved my eating immensely, my new colleagues always offering me cake and chocolate certainly has helped! My parents, girlfriend and friends have all been checking that I have been eating and I even have a doctor friend on the other side of the world checking in on me! I am now happy to say that I have gained weight and it may not be much but it has definitely made me feel better about things.
Previously, my confidence in my body had plummeted and I hadn’t actually been to anything naked since I moved down here. Sometimes due to being busy and unable to attend but also because I wimped out a little, due to the way I looked. I thought I was too skinny, ribs showing, spine sticking out and all over, just a bit disgusting. I know that this is not what I preach, body confidence is a big thing for me and I feel that if more people accepted the way that they and others looked then the world would be a better place. However, I was in a bad place there and thinking back now, I want to kick myself. It is sometimes very hard to maintain that comfort in your body, even when you are such an out and out naturist. You become so entangled in your own thoughts that you end up losing sight of what is important. My girlfriend told me that I didn’t look disgusting and was beautiful. “You look fine, stop worrying”, she kept saying but I wasn’t having any of it. She tried to keep my confidence up but it didn’t work that well i’m afraid but it wasn’t her fault. I was just feeling so strongly about it that she couldn’t get through much.

Just recently, I went up to see some friends in Lincolnshire and they took me to their local nude swim. I tried not to let it show but for the first time since I entered the naturist world I was as nervous as hell and was worried that people would stare, not least my friends. It was a silly worry I know but I couldn’t help it. The thing is, I decided that there was no way I could let my lack of confidence show, I didn’t want my friends or anybody else to see that I wasn’t entirely happy and comfortable there. So I just had to suck it up and do it, it wasn’t like I hadn’t done it before right? At my first swim I was nervous too, and that was because it was something I hadn’t done before. And this time I was with people I knew, not on my own.

And then an amazing realisation occurred when I got into the pool. It was FINE! It was no different than before, nobody stared, judged or ridiculed because they don’t. I felt ok and it could only get better. I see now that I didn’t even look as bad as I thought and my spine and ribs probably didn’t stick out anywhere near as much as I thought they did. I was blinkered by the thought that I had lost too much weight, was too thin and this made me see it as worse than it was. My girlfriend was right, I didn’t look disgusting.
So I want to say thank you to my friends for taking me to the swim because, although they may not have realised it, and I said I wanted to go and as far as I know showed no signs of nervousness, by taking me along that night, they did me a huge favor and got my opinion of my naked self back on the right track.

Another thing that has really helped since then is all the messages of support I have been getting from people who have read my blog. It’s not just from naturists either, I have had a couple of messages from people who have or have had eating disorders and issues. I had one from a young girl, she was only 14 years old and she was anorexic. Her message of support was just so lovely, especially as it was coming from someone in a much worse situation than me. She told me that I was so brave for seeing and recognising a problem before it got even worse and was too late. I didn’t know what to say really, she told me her story and it was very sad. I didn’t have the usual mentality of what I thought an anorexic had, which is ‘I’m too fat, I shouldn’t eat’, but she said that it wasn’t just that that led to it, depression and stress was a very common factor as well. Anyway, it was such a lovely message of support and I have had many more like it. Some say i’m inspiring and helped them get into naturism.

For all of these people that have contacted me about my blog and my weight issues, thank you very much. After the swim and reading through all those messages, I have really felt back on the right track to gaining my confidence back and that is such a massive thing and I cannot thank those that have helped me enough. My girlfriend, friends, family and even complete strangers. You are all so very lovely and supportive. So all that I can say now is, BIG NAKED LOVE TO YOU ALL!
Posted by Becky Stanworth at 05:09

Beinn a Chroin is a delightful little mountain that sits at the back of the great range that can be seen to the south of Crianlarich. Although sometimes climbed as part of a larger circuit from the north, we decided to take the south approach, starting at the same Inverlochlarig starting point we had used for the death march that was the Ben More ascent.

We headed west from the car park, past the small cluster of farm buildings and passing the southern slopes of Beinn Tulaichean, a mountain I first climbed almost twenty years ago, before reaching the beginning of the ascent.

Within minutes we stopped. It was a hot day and the rock pools were just too tempting to ignore and a cooling dip refreshed us for the climb ahead.

As we ascended the south eastern slopes of the mountain we quickly gained height despite the absence of a path and we soon reached the rocky outcrops we had to navigate through. We stopped for a few minutes to relax and enjoy the soft grass we had climbed up before the mountain, as is typical for this area, underwent the transition to a much rockier terrain

We continued on, picking our way through the rocky outcrops up to a small col where we began an ascending traverse on the south slope that quickly brought us to the summit. It was late in the day, the sun was getting low and we had some beautiful light.

As I photographed Karla I was amazed by the beauty and warmth of the light that smothered the mountains with a golden red hue, filtered and tempered by the gathering clouds.

What a spot! To the east of us stood the craggy Cruach Ardrain with the twin peaks of Ben More and Stob Binnein beyond. Beinn Dorain and the Bridge of Orchy Corbetts sat in shadow to the north. The outcrops of rock that surrounded us were layered and twisted, a testament to ancient mountain building forces, laid bare by eons of erosion.

It was a magnificent time and place to be. There are times when all you can do is jump with joy and the magnificence of the beauty around you.

There is one obvious logical consequence to a glorious golden sunset atop a mountain, and that’s either a night’s camping or a descent in the dark if you don’t move quickly. We moved quickly, descending directly south from the col to the west and down towards the track in the glen, covering the decent in a little over an hour. With a bulldozed track underfoot it was an easy walk out, bringing us back to the car as the final light of the day faded into night.

Argentina-based visual artist Jorge Aragon has had work, mainly featuring gorgeous nude studies, published in campaigns all over the world. When he’s not working with natural lighting in black and white, his other style focuses more on graphic design, editing photos to beautifully highlight his subjects while creating alternate realities of gorgeous light landscapes.

This series, Double Exposure, takes multiple versions of the same photo, each with a deeper level of light exposure, and super imposes them onto one another, highlighting the models’ barest features.